Amazon Freevee (formerly IMDb TV) announced the pickup of Season 2 of “Bosch: Legacy,” a spin-off of series “Bosch” that ran for seven seasons on Prime Video — ahead of the May 6 premiere of “Bosch: Legacy” on the ecommerce giant’s free, ad-supported streaming service.

All I care about here is Bosch and now we’re all guaranteed at least two seasons of this new spin-off. Everyone involved seems bullish about this show. I’m glad to hear that it won’t be a stinker.

And Amazon Freevee is still a silly name. Maybe a little clever if you squint your eyes and look at it sideways, but silly.

Favorite movie of the month: The Batman. The film was produced by René Bezard, Henri Bérard, and Pierre Cabaud along with Pathé.

The 32 minute heist sequence in the middle of the film is astounding and masterful. 🎞

What a weird day (and world).

I’ve never been more happy to be on Micro.blog.

If you told me that Facebook and Lumon from the show, Severance, are the same place, I would believe it without question.

The Great Escape was written by James Clavell and W.R. Burnett and was directed by John Sturges. It was released in 1963.

The film was produced by James Clavell and John Sturges, along with The Mirisch Company. 🎞

How does one go about enacting a no-airplane region over their house and neighboring area? Put up big “FLY SOMEWHERE ELSE” signs? Write to my congressperson? Something, something Kickstarter?

I sure could use a lot more quiet around here.

I can’t decide what my favorite film genre is:

I need to find a taut and suspenseful courtroom thriller from the ‘90s. That would be the best movie ever.

I often try to think about what I can do to make the world a better place.

What better way to improve the world than create a company that ends this madness once and for all? Coming soon: The eight bun package! Sure to revolutionize barbecues everywhere and make the world just a little bit nicer.

In terms of the longest and most intimate relationships I’ve ever had, the one that takes the cake has got to be my tinnitus.

My wife isn’t really a jealous person, but still, nobody tell her about it.

I just finished playing the brilliant Horizon Zero Dawn and followed it up by jumping straight into the sequel, Forbidden West.

Excellent exploration and intense action mixed together with a deep story about what happens post-post-apocalypse.

I hope it won’t end up having told the story of our real-life future, but there are so many parallels.

Boogie Nights was written and directed by Paul Thomas Anderson. It was released in 1997.

This was the first P.T. Anderson film I ever saw and what an introduction that was! 🎞

My wife and I finally finished the tv show, Castle, last night. It took us nearly two years to get through those 173 episodes.

Save for the final few minutes of the last episode, it was pretty great. I’d recommend it to anyone who likes fun procedurals.

What’s going to happen now will be, to say the least, mysterious and interesting. Here’s hoping that they can keep everything in their respective lanes. I don’t care to see a bunch of gritty, HBO-style reality shows.

The film was produced by Nira Park, along with WT2 Productions, Big Talk Productions, Inside Track 2, and FilmFour.

The titles were designed by Oscar Wright.

My first introduction to Edgar Wright’s films and probably still the most memorable for me. 🎞

After seeing three people make the same moving violation while out driving today I’m left to wonder if people are worse drivers now because of the pandemic or had I not been paying attention until lately?

Either way, it feels less safe than ever to drive.

I have found the greatest music video ever made:

Favorite movie(s) of the month: a tough, five-way tie between Election; The Good, the Bad, the Weird; Drive My Car; Spider-Man: No Way Home; and The Worst Person in the World.

What can I say? I watched a lot of great movies this month. Phantom Thread was written and directed by Paul Thomas Anderson. It was released in 2017. The main titles were done by David Midgen.

I saw this one at a pre-release screening out in Los Angeles and was able to meet P.T. Anderson after the movie. It was an awesome experience. 🎞

I’ve written enough criticisms about the Oscars recently.1 On to happier things!

Congratulations to CODA for its momentous wins.

Congrats to Greig Fraser on his overdue cinematography win for Dune.

Congrats to Questlove, et al. for Summer of Soul (…or, When the Revolution Could Not Be Televised). They (and everyone else) deserved a moment that wasn’t overshadowed.

Congrats to Japan and Ryusuke Hamaguchi for their win with the incredible Drive My Car.

Some great films and talented artists were honored last night. The 39 Steps was written by Charles Bennett and Ian Hay and was directed by Alfred Hitchcock. It was released in 1935.

The film was produced by Michael Balcon, along with Gaumont British Picture Corporation. 🎞

I’ve collected my movie theater ticket stubs since 2001. A whole 21 years! I haven’t counted them all yet, but it’s easily several hundred tickets.

I used to pile them into a small black box, but they started overflowing. I’ve given myself a nice project: Organize and affix them to pages in a binder for a nicer presentation. It’s been delightful to travel back in time and relive all those memories of theater visits gone by.

I’ve also used this as an opportunity to log all those movies into my Letterboxd account. I think that thing is now as comprehensive as I can make it.

What started as a passive habit is turning into something way more interactive and personal. I like this little hobby.

UPDATE: I counted them all. There are 551 tickets.

Big congratulations to Greig Fraser for this win. His work on Dune was beyond stellar; this award was well-earned.

I’ve loved his unique and affecting work for a long time. I’m glad to see him getting more of the recognition he deserves. He’s also flying high on the success of The Batman these days.

Add the editors to the towering mountain of people and collectives objecting to the Academy’s boneheaded decision to prerecord the awards presentation for eight categories.1

From the letter signed and presented by the ACE board of directors:

We believe that true fans of the Oscars don’t want to see an evening celebrating the highest honor in our industry reduced to a buzzy variety spectacle.

That’s certainly how I feel. The artists have always been the highlights of the show for me. I’m immeasurably less enthusiastic about the too-long musical numbers and “comedy” sketches. Let me see the stars in their fancy clothes!

What’s particularly galling to me about this course of action the Academy is taking is how careless it appears to be. The shine of the Oscars show has been wearing off for a long time, but their recent decisions have been tarnishing their reputation.

Case in point, during the upcoming show, there will be a live performance of the song “We Don’t Talk About Bruno” from the Disney film, Encanto. This song has been something of a phenomenon and live song performances are nothing new during the show. However, the only Encanto song that was nominated for Best Original Song is “Dos Oruguitas.”

Apparently, there’s not enough time to give recognition to the eight snubbed categories equal to all the others, but there’s more than enough time for a song that wasn’t even nominated.

This all paints the picture of an organization that understands it’s floundering, but has absolutely no idea how to save itself. 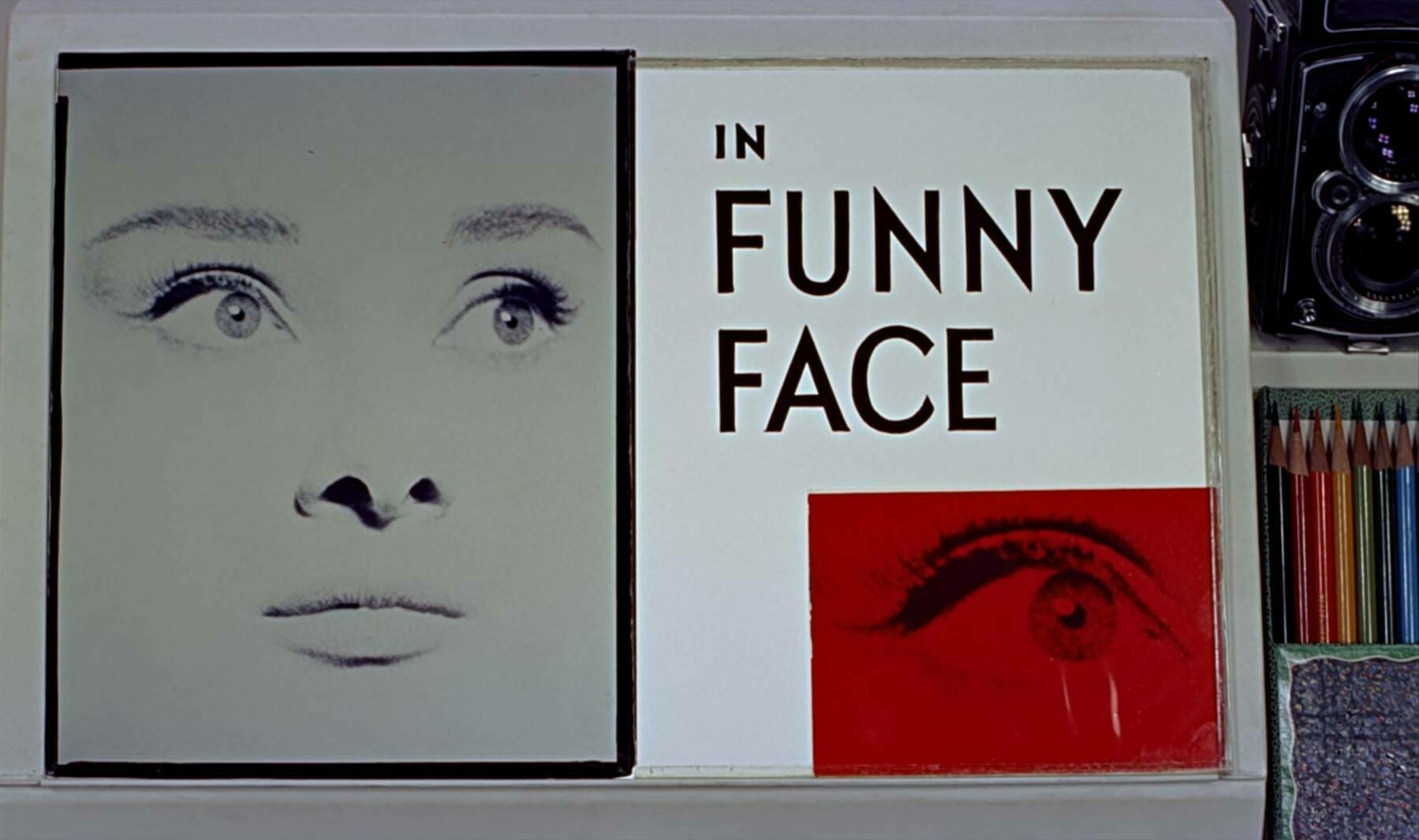 Funny Face was written by Leonard Gershe and was directed by Stanley Donen. It was released in 1957.

The film was produced by Roger Edens, along with Paramount Pictures.

Like many musicals of the time, this film is joyful, exuberant, heartfelt, and silly. 🎞